Share
They are mechanics. They are athletes. They’re as fast and efficient as "their" Ferrari. Like this red single seater that knows how to win in Formula 1. They’re analysed, assisted and trained thanks to the work of a team of 200 Technogym specialists, equally dedicated to the quest for maximum performance.

Behind the results of the Scuderia di Maranello lies a new and unprecedented chapter in the long relationship between Technogym and Ferrari, which began with Michael Schumacher's arrival in Maranello in 1996 and which has been nurtured over time by a number of fruitful exchanges. A long-standing harmony allowing, today, to transfer the care dedicated to the drivers' physical preparation to every employee (two gyms, at Fiorano and at Maranello Village, open full-time): a revolutionary and specific approach, launched last winter and dedicated to the boys involved in tyre changes during Grands Prix. Men and gestures which are equally fundamental to give the "F1-75" sprint and rhythm, even when they are stationary in the pit lane.

The stress is consistent for mechanics for such a complex, decisive action, which is made more complicated by bigger tyres, heavier rims, less accessible grips. Just a few seconds, 4 tyres to change, 23 people involved in an intra-muscle competition made up of synchronism and targeted efforts. This is something that requires a completely new kind of training: "We proposed to Ferrari an evolved step of evaluation on the biomechanical front" explains Silvano Zanuso, director of the Technogym Scientific Department, "in order to get a very sophisticated analysis of the movements that the mechanics make during the tyre change; the aim is to speed up the process and avoid injuries". This initiative has been enthusiastically welcomed by the Gestione Sportiva and Med-Ex, which is in charge of Ferrari team's health and athletic preparation: "For us, the partnership with Technogym has always been a source of pride," says Diego Ioverno, Head of Vehicle Operations at Scuderia Ferrari, "it implies receiving continuous feedback to improve the performance of our guys. The tyre change, in particular, is a key moment in every Grand Prix. It's a delicate phase in constant evolution, like every other element in F1, and we needed to take advantage of a technology that could evolve and further refine our work. Technogym specialists provided avant-garde suggestions."

First consequence: the team of Ferrari mechanics moved from Emilia to Romagna, in Cesena, to undergo an in-depth investigation never seen before using a series of integrated instruments at the Technogym Lab: "It's one of the biggest force platforms in the world," Zanuso continues, "which registers the forces exerted on the ground in the three dimensions of space, integrated with sensors measuring muscle activation and a system of digital cameras to analyse movement. The mechanics climbed up onto this platform in groups of three: those who remove the wheel, those who put the wheel on, and those who use the gun to unscrew and screw. Electromyographic sensors were applied to the body of each of them and they were monitored by special infrared cameras, which are essential for us to understand muscle dynamics in detail and thus identify the best handling strategy in terms of effectiveness and safety". 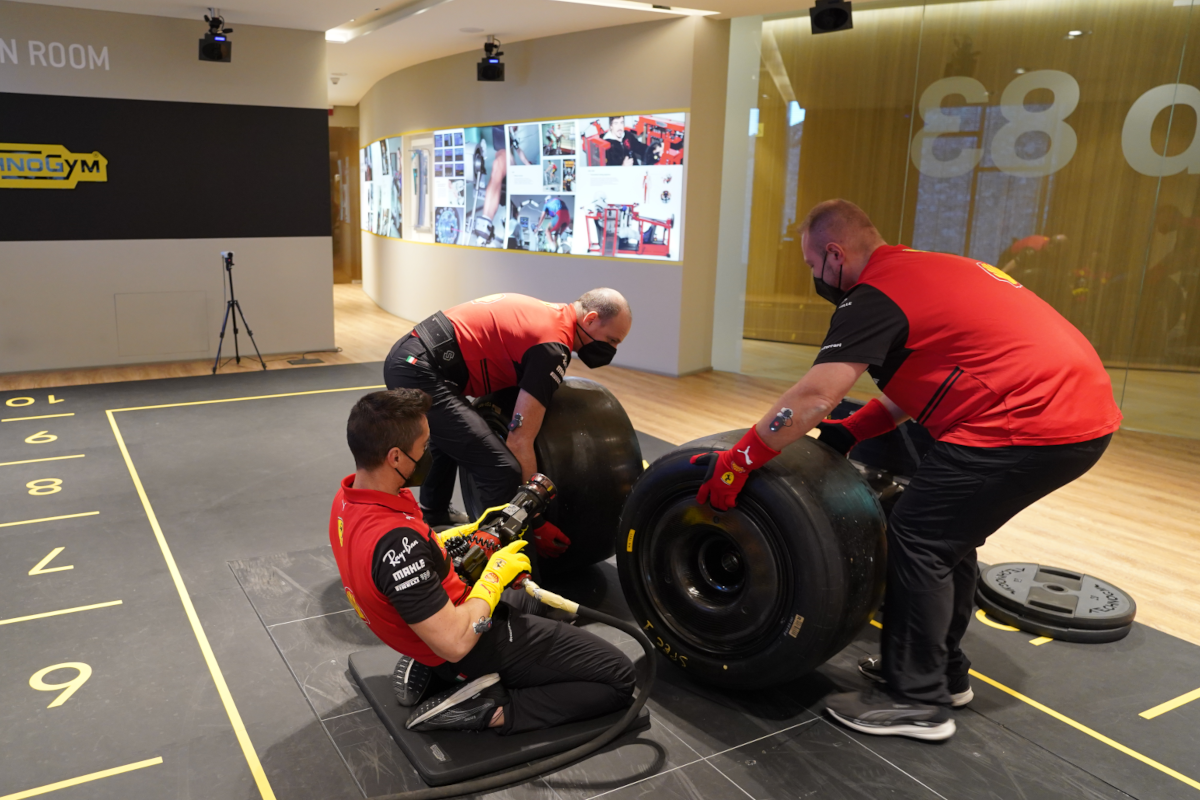 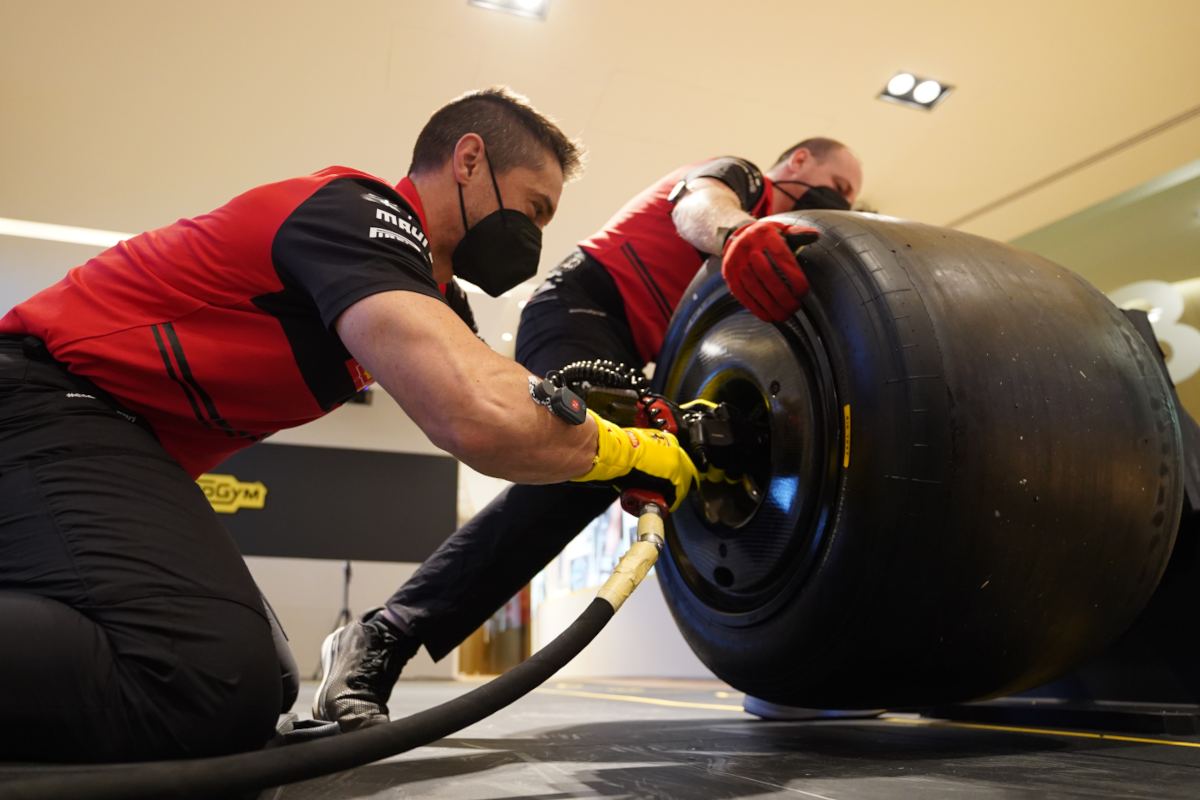 View the gallery
Technogym Lab’s studies include 35 universities around the world and this procedure used for the Ferrari team is also used for many top-level athletes, from tennis to skiing. An 'electromusculogram', to be precise, which allows individual training paths related to the stimulated muscle groups and to the forces exerted in the specific action: "In this way, mechanics get to follow a programme based on aerobic activity, using our cardio equipment or our strength training products, all of which are also available in the Maranello Village gym. The programme also includes specific strength exercises, defined through the analysis of each mechanic’s individual positions at the pit stop using our cable equipment, which improves resistance compared to a moving mass. In addition, weights and free-body exercises to train core muscle, which used to be called the 'abdominal-lumbar corset’”. In essence, the backbone of the human body. These exercises are also included in the new Technogym App, available to Ferrari employees.

It is a matter of seconds: they determine a team's entire performance, which contributes to Ferrari's success in the 2022 World Championship. The protagonists act in a rhythmic, harmonious concert, fully in tune with the efficiency required by the Formula 1 universe: speed, safety, effectiveness; and what’s more, this takes place under enormous pressure, which gets reduced and managed at best thanks to the awareness of a specific, fitting and therefore reassuring physical form. This has emerged after these first months of joint work, which is so innovative and complex that it traces a course which has never been followed before in Motorsport. “Technogym has provided us with an innovative method," comments Ioverno, "thanks to which we can count on effective planning of the training work. It generates physical efficiency and confidence: a considerable benefit compared to the past and a step forward in sports performance”.

Bobsleigh: everything you need to know about this fascinating sport

In this article you will find everything you need to know about bobsleigh, exciting sport where ice ...

How can we help you?

For information about orders

All our operators are currently busy

Try again in a few minutes, or write us a message and we'll get back to you as soon as possible

The chat will be available again soon

The chat is active at these times:

You can also write us a message: we will reply as soon as possible

Or book a telephone appointment

How can we help you?

For information about orders

All our operators are currently busy

Try again in a few minutes, or write us a message and we'll get back to you as soon as possible

The chat will be available again soon

The chat is active at these times:

You can also write us a message: we will reply as soon as possible

Or book a telephone appointment